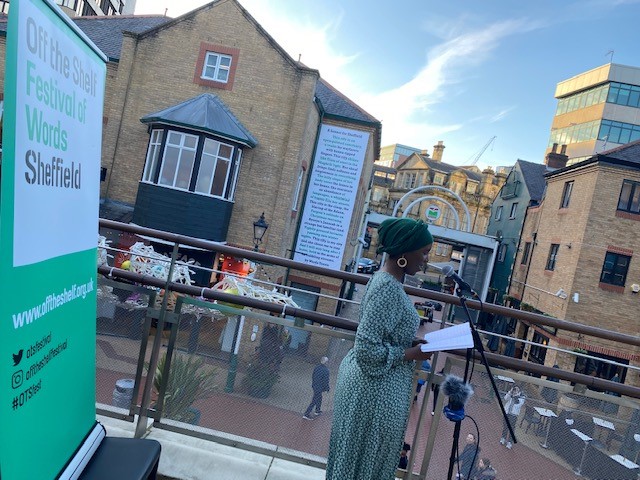 To celebrate the 30th edition of Off the Shelf,  Orchard Square has commissioned a poem from Sheffield’s current poet laureate Warda Yassin that is displayed on a prominent wall within its courtyard. See Warda’s performing the poem at it’s launch on Saturday 30 October.

Warda joins a roll call of well known and revered literary names from Harold Pinter, to two UK poet laureates; Carol Ann Duffy and Andrew Motion, as well as the recent Scottish Makar; Jackie Kay, who have contributed their poems over the years and these can still be seen on and in buildings and structures in various part of the city.

Warda Yassin comments: “I want to thank everyone that made this happen. Text in the City is a really wonderful project – I often enjoyed the Andrew Motion poem when I was going to and from Hallam University. To be part of this initiative is a great honour. I chose the sonnet format as it often lends itself to love and appreciation, and I wanted to be able to put together and explore the parts of Sheffield that are special to me so there are some quite personal lines in it. I also wanted to show that Sheffield is essentially a place for everyone and a city of sanctuary for all those who choose to live here. I am looking forward to having it displayed on a banner in a public place – as well as being daunting – it is great to have something that celebrates Sheffield.”

Nicola Blake, Asset Manager for Orchard Square said: “The city of Sheffield has experienced so much over these last few years and Orchard Square is also changing for the better. We felt it was only right that we should support and celebrate Off the Shelf in its 30th year and also add to the city’s poetry in public places, so we are delighted that Warda agreed to write the city a sonnet. Warda is a hugely talented writer and it is wonderful that her beautiful poem will be there in the centre of Orchard Square for everyone to enjoy.”

Professor Vanessa Toulmin, Director of City & Culture, Partnerships and Regional Engagement at the University of Sheffield said: “Text in the City is unique to Off the Shelf and was introduced in the late 1990’s. Warda’s poem is such a lovely tribute to Sheffield and being in a public thoroughfare means we can share her sentiments with visitors as well as those who live here. What better way to mark three decades of this great festival.”

You can find out more about which cookies we are using or switch them off in settings.

This website uses cookies so that we can provide you with the best user experience possible. Cookie information is stored in your browser and performs functions such as recognising you when you return to our website and helping our team to understand which sections of the website you find most interesting and useful.

Strictly Necessary Cookie should be enabled at all times so that we can save your preferences for cookie settings.

If you disable this cookie, we will not be able to save your preferences. This means that every time you visit this website you will need to enable or disable cookies again.

This website uses Google Analytics to collect anonymous information such as the number of visitors to the site, and the most popular pages.

Please enable Strictly Necessary Cookies first so that we can save your preferences!